Dwight D. Eisenhower was able to experience the benefits of fast-moving highways on two separate occasions– first, as Lt. Col. in the army. Lt. Col. Eisenhower volunteered to be a part of the United States’ first transcontinental convoy. This convoy was responsible for testing the mobility of the military by traveling from Washington D.C. to San Francisco. A few decades later, now a General, Gen. Eisenhower was starstruck by the highway systems of Europe while stationed in Germany. The first experience made him realize how difficult travel was due to poor road conditions and mechanical difficulties in the automobiles. The latter experience opened his eyes and showed him the endless benefits of having a united highway system.

When elected into office, President Eisenhower, on June 29th, 1956, signed the Federal-Aid Highway Act of 1956. This law would established an intricate system of highways across that nation that would promote quick and safe travel across the United States. These multi-lane highways would reduce traffic-jams and limit the use of unsafe roads. Overpasses and underpasses replaced intersections to stimulate a constant flow of traffic. The federal government would be responsible for constructing the nationwide road system (See below) while funds were raised by an increased gasoline tax. 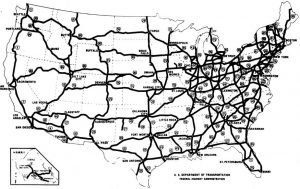 Benefits not only extended to citizens and businesses, but for the government as well. Eisenhower saw the national highway system as a means to bolster the United States’ national defense. The highways would allow the US military to react and move quickly to any part of the country.

Above: The first construction of the Federal-Aid Highway Act began in Missouri.

Congress’s overwhelming support for the Federal-Aid Highway Act was echoed by the American public. Americans were enamored with the notion of being able to travel cross-country easily and safely. The constructing of the highways put thousands of people to work. Those who worked in the actual construction of the highways benefitted but those who worked in industries remotely related saw a boom in business as well. Businesses near the highways, such as hotels and restaurants, began to pop up and flourish due to the new influx of customers.

Although most supported the law, those who opposed it had their reasons. The newly constructed roads drove people out of the construction areas and tore communities in half due to roads’ placement in certain cities. Activists began fighting back in cities such as New York and San Francisco. Activists did cause construction to halt in a handful of places but overall their movement did not recieve enough traction to stop construction entirely. 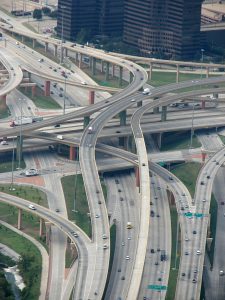 Above: “High Five” interchange in Dallas,TX is one of the first five level stack interchanges.